I/ A FEDERATION OF FRONT DEPARTMENTS

Established on July 12, 2011, the association “Landscapes and Memorials of the Great War” federates the French Departments of the Western Front (Western Theater of the Great War) except Bas – Rhin to apply for inscribing in the list of UNESCO Heritage Sites as the “Funerary Sites and Memorials of the First World War”. The association is regulated by the law of July 1, 1901 and the decree of August 18, 1901. Initially, composed of 9 Department Members by right, it now counts 13 Departments: Nord, Pas-de-Calais, Somme, Oise, Aisne, Seine et Marne, Ardennes, Marne, Meuse, Moselle, Meurthe et Moselle, Vosges, Haut-Rhin. It covers entire French part of the Western Front of the Great War as well. 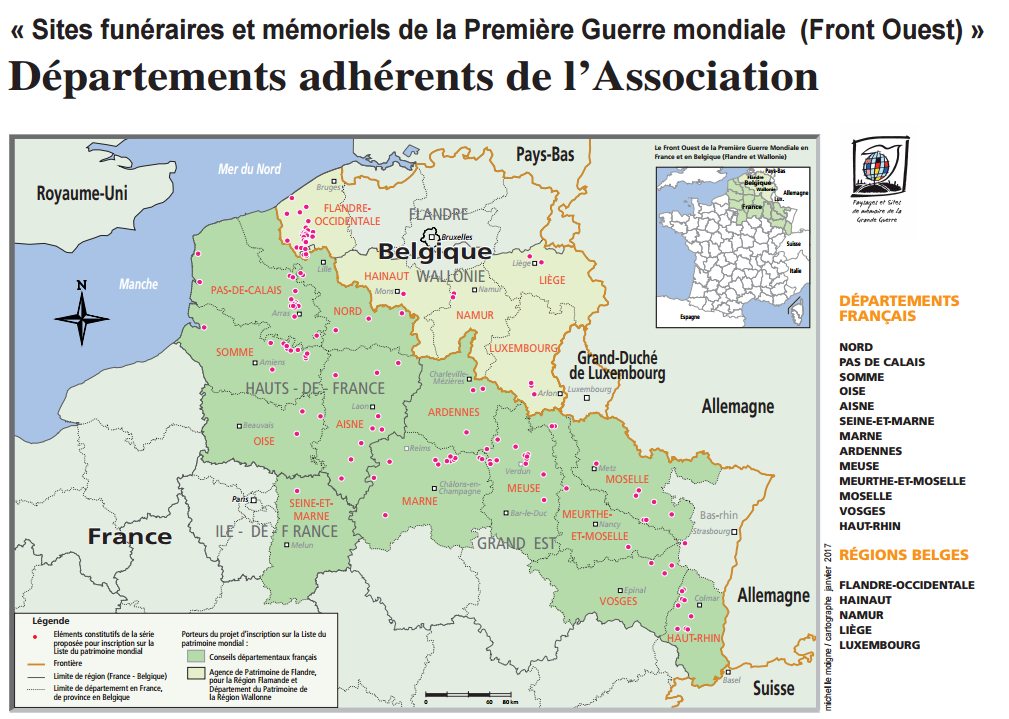 The mission is to cooperate with Flandre and Wallonie and carry out its application procedure of transnational project to inscribe in “Funerary Sites and Memorials of the First World War, West Front”. The association is responsible for accompanying and monitoring the application.

– July 12, 2011: Creation of the association “Landscapes and Memorials of the Great War”

– January 30, 2017: Signature and deposit of nomination file to the World Heritage Center by Belgium on behalf of itself and on behalf of France.

Some important dates (Some key dates)

The association assure the general coordination and follow – up for the French territory of the Franco – Belgian transnational application project, based on the network of departmental coordinators.

To this end, it assures by representing in all different territorial scales.

II/ A REPRESENTATION AT ALL TERRITORIAL SCALES

A – Composition of Bureau (Office):

> The political representatives of Departmental Councils:

2) The representatives of Necropolis Management Services

3) The representatives of Missions or partner associations

4) The representatives of the partner authorities

5) The representatives of Scientific Committee

6) The representatives of Departmental Coordinators

7) The Animators of the associations

> Composition of Executive Board :

The Bureau of the Association acts as a Board of Directors. It is composed of Executive Board and the Bureau itself. They meet at least once every two months, minimum 6 meetings a year. The Executive Board manages and examines the problems occurred between plenary meetings of the Bureau.

A- 1. The coordinators and their role

Each Department Council agree to meet and to animate Departmental Committees of the project of UNESCO Nomination Project. The departmental coordinator is responsible for overseeing of the right functioning of the committee, advising regional and local authorities in the implementation of actions, protection, conservation, awareness of the UVE (Universal Value of Exception) of all publics and dissemination of knowledge.

Mrs Damien Marie – Madeleine (perso.damien@wanadoo.fr,;  06 86 99 96 03),  coordinates all the missions related to the nomination file and the follow-up of the application procedures: writing the final application project in coordination with the scientific committee, following-up of technical aspects, accompanying experts, supervising departmental coordinators. She is responsible for monitoring the partnership of associations at all territorial levels and collaborating with the association’s external parties and management of headquarter in agreement with the General Secretary.

C- The participation of external parties in the specific project components

Michel LE MOIGNE, independent cartographer, graduated from the Ecole Supérieure de Géographie Cartographie at Institute of Geography of Paris I in 1973.
He creates the cartographic atlas of the candidature project of the French territory and the Franco-Belgian transnational territory of the Western Front and the atlas of the protection.

The scientific committee is animated by Stéphane Tison and Annette Becker